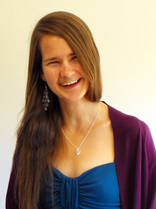 Laura Bulk, Victoria, BC, received her Bachelor of Social Work in 2012 from the University of Victoria, her Master of Occupational Therapy in 2014 from UBC and is pursuing her PhD in Rehabilitation Sciences at UBC. Laura’s research project, “Being blind in a sighted world”, has far reaching affects for the 285 million people world-wide, who experience blindness (including low vision). It will explore the significant impact on education, literacy, employment, community mobility, socialization and parenting. It will also help negate the negative misperceptions of society through influencing attitudes and policymakers. Most of the current literature is dominated by the views of sighted scholars and professionals. However, Laura’s research will be conducted from a different perspective: a person with a visual impairment. She is a member of the International Consortium for Inclusive Campuses, with scholars from seven nations, who are conducting research to increase the inclusion of persons with disabilities in health and human service professions. Laura is a volunteer for CNIB and a role model for families learning about vision loss. She is a storyteller for VoiceEye, an organization making arts and culture accessible for people who are blind/partially sighted.​

Michael Harder, ​Steinbach, MB, received his BSc (Honours) from the University of Manitoba in 2011 and his MSc from the University of Victoria in 2013. Pursuing his doctorate at the University of Manitoba, Michael’s discipline is physics, specifically the field of “spintronics”, which will be used to design the next generation of electronics. To keep pace with the increasing demand for computing power, the density of integrated circuits must also increase. Because of limitations with the current designs, they have to rethink how electronic devices operate. “This is the goal of spintronics, a field which aims to exploit the electron’s spin, rather than its charge, to build electronics.” Michael’s research is in the area of cavity-spintronics, a new field in its infancy, that will ultimately create faster, more energy efficient electronics. At this early stage of his career, he has demonstrated great potential as a researcher and teacher. Michael volunteers for Let’s Talk Science. He is very interested in promoting scientific literacy, especially for disadvantaged students, by organizing in class physics activities, after school science programs and high school science summer camps.

Samantha Harder, ​Winnipeg, MB, received her BSc (Honours) from the University of Manitoba in 2011, her MSc (Physics) in 2013 from the University of Victoria where she is currently pursuing her Doctorate in Physics. Her research is in the area of Radiation Therapy in cancer treatment. At present, there is no clinically accepted method for measuring a patient’s radiosensitivity. The goal of Samantha’s research is to establish Raman spectroscopy as a clinically applicable technique for measuring a patient’s radiosensitivity. She has designed a Raman microfluidic chip that verified the concept that individuals respond uniquely to radiation. With this information, the development of personalized radiation therapy will become a clinical reality. Her project is complicated and extends across multiple disciplines of physics, engineering, advanced data analysis and radiation biology. One of her referee’s states, “I see the product of her PhD to be highly novel and applicable to the problems facing oncologists treating patients with radiation.” Samantha has an outstanding potential to contribute important research for cancer treatment in Canada. She volunteers for Girl Guides of Canada as a Brownie and Guide leader.

Sue Peters, Tillsonburg, ON, received her BA (Honours Kinesiology) in 2005 and her Master of Physical Therapy in 2007 from the University of Western Ontario. She is pursuing her PhD in Rehabilitation Science at UBC. Sue’s title for her research is “Brain and muscle function during the planning leg movement after stroke.” The ability to walk in the community is the most commonly cited goal of people after a stroke. Her main goal is to understand how a stroke changes the brain’s ability to plan and pay attention during stepping movements. At present, there is little research performed in the lower limbs after suffering a strike. The results of her study will provide crucial information to further stroke rehabilitation strategies and increase the understanding of planning and attention to advance the concept of keeping stroke victims active in the community. It will lead to the development of novel rehabilitation approaches that will improve balance and gait, thus improving their quality of life. This research is ground breaking and appears to be highly predictive of the potential level of functional recovery after suffering a stroke. Sue has volunteered with Let’s Talk Science and organized a golf tournament with proceeds benefiting Thames Valley Children Centre in London.

Jamie Rothenburger, North Battleford, SK, completed her DVM (Doctor of Veterinary Medicine) in 2010 and MVetSC (Master of Veterinary Science) in 2013 from the University of Saskatchewan. She is currently enrolled in the Doctor of Philosophy, Wildlife Disease program at the University of Guelph. Jamie’s research involves rat populations, which in Canada are thriving and how people contract infections transmitted from rats to people. She is particularly fascinated by wildlife-associated zoonotic diseases (infections transmitted from animals to people) of which Plague and Leptospirosis are two of the most well-known. These infections pose a growing threat to human health. Jamie’s career goal is to integrate pathology, epidemiology and public health while studying these diseases. By delving deeper into the issues of disease ecology and examining the impact of the urban environment and rat health, she will be able to guide public health surveillance and interventions. This research will also help better understand how diseases are transmitted and maintained in wild animal populations. Jamie is a contributor to the Western Producer, Canada’s largest agricultural publication. She interprets and spreads scientific discoveries in veterinary medicine to the animal owners who are most impacted by disease. She volunteers with Veterinarians Without Borders and has worked with First Nation Communities throughout Alberta on the Spay and Neuter Task Force.