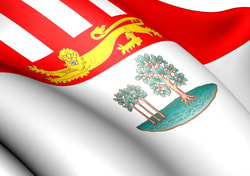 Fourteen women met in Charlottetown in early 1901 to discuss forming an IODE chapter.  As a result, Royal Edward Chapter was organized as the ninth primary chapter in Canada.  Its charter was granted on April 19, 1901 making it the longest serving chapter in the country.  Their initial contribution was to send comforts to 99 servicemen and one sister who were serving in South Africa's Boer War.

Half a century later, three more chapters had been organized.  Chapters supported the World War II effort by sending bandages, food parcels and monetary relief.  Afterwards, they worked with women, youth and children.  In 1954 a Central Committee was formed to act as a liaison between the four primary chapters and the National Chapter.  This committee evolved into the Provincial Chapter of Prince Edward Island IODE.  The charter was granted on May 18, 1962.

In 1999, the Provincial Chapter partnered with Learning and Reading Partners Adult Learning System to produce 'Learning Begins - Brain Development and Learning from Conception Through Age 2".  This program, developed in PEI, has since been used across Canada.

The Provincial Chapter partnered with Aliant Telephone Pioneers in 2004 to introduce a pilot reading project, "A Book About Me", to a Grade 1 class.  Other Provincial Chapter activities include placing a memorial wreath at the Cenotaph each November 11, attending a Founder's Day service, greeting and presenting gifts to new Canadians at Citizenship Court ceremonies.  For many years, the Chapter hosted an International Students Dinner foreign students studying on the Island.

Dates of historical significance have been marked with gifts to the community. In 1964 a painting by local artist Georgie Read Barton was given to the National Confederation of the Arts, Charlottetown.  To mark Canada's centennial, five bursaries of $1,000 were presented to Island students studying art, drama and music.  In 1973, Prince Edward Island's centennial, members catered to over 1,000 guests attending the Lieutenant Governor's Garden Party honouring the royal visit of Her Majesty Queen Elizabeth II and Prince Philip.  A flower garden was planted at Queen Elizabeth Hospital to commemorate IODE's 100th Anniversary.

Chapters have chosen names with a particular relationship to the province.  They are:  Royal Edward, Abegweit, Earl of Hillsborough, Lucy Maude Montgomery, Lady's Slipper, Lake of Shining Waters (which evolved from the junior chapter named Anne of Green Gables), Fort Amherst, Lady Holland and Northumberland.

These chapters show their concern about the welfare of children by supporting milk and educational programs, by supplying "Food for Thought" boxes at schools, by engaging in literacy programs, by providing bursaries and scholarships, by offering support to autistic children, by giving to needy and abused children.  "Baby Think It Over" started for IODE on the Island and continues to influence the lives of teenagers.  Children in Labrador are remembered through the "Labrador Adopt-A-Class" program.

Women and others in need are helped through community programs such as Wigs and Wraps of Love for women with cancer.  One chapter refurbished the community soup kitchen plus a bedroom and family room at a shelter for abused women and children and provided a new entertainment centre for a group home.  Other gifts include Christmas dinners and hampers for veterans.

Many notable women have served IODE on the Island over the years, not the least of these being Miss Wanda Lefrugey Wyatt, who joined Abegweit Chapter, Summerside, in 1915.  At the time of her death in 1998 at age 102 she was the longest serving member in Canada.  Miss Wyatt held many offices and left a legacy, not only to IODE, but also to Island culture.  In 1983 she donated a silver rose bowl to the Provincial Chapter of PEI.  It is given annually to the chapter having the greatest percentage increase in membership.

PEI members are inspired by outstanding, dedicated women and continue to work enthusiastically to carry out the service envisioned by Margaret Poison Murray 107 years ago.