The Significance of the Badge 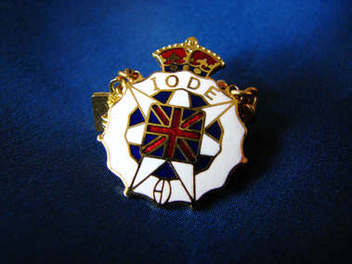 The Badge is the emblem of membership in IODE. The seven-pointed star on a dark blue background has at its centre the Royal Union Flag (Union Jack) showing our pride that Canada is a member of the Commonwealth of Nations.

The surrounding white circle embodying the name of the Organization in gold lettering is securely clasped at the base and symbolizes the unity of purpose of all members. The crown surmounting the Badge represents loyalty to the Queen of Canada.

The Governor General is the representative of the Queen in Canada.

Some IODE members will also have a bar (or several bars) above their badge designating them as a past president/regent and/or a life member in either their own chapter and/or at the Municipal, Provincial or National levels.

The badge is always worn over a member’s heart.