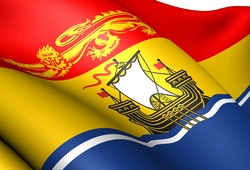 New Brunswick holds the proud claim as the birthplace of IODE.  The first meeting was held in Fredericton on January 15th, 1900 in response to a telegram from Margaret Polson Murray of Montreal whose goal was to stimulate patriotism toward the British Empire.  Members immediately contributed fully to an emergency war fund and provided comforts for soldiers fighting in the Boer War in South Africa.  At war's end, New Brunswick members expanded their work into education and welfare.  Mrs. Katherine Black was the first provincial chapter president.

During World War I, New Brunswick contributed to the $5,500,000 raised across Canada by IODE as well as making and sending comforts to servicemen.  Following the war, they erected cenotaphs in Fredericton and Moncton and placed the Soldiers' Memorial in the Saint John Field of Honour.  New Brunswick was first among provincial chapters to contribute their total share when the First War Memorial Bursaries were initiated.  During the '30s members enlarged their work with donations of food, clothing and schoolbooks.  They supplied libraries and provided prizes for students at adopted schools.

Fundraising expanded to supply relief to Britain during World War II.  New Brunswick members honoured one of their own, Lord Beaverbrook, with the purchase of a $26,125 Spitfire aircraft.  Following the war, members continued intensive service work, supported 364 adopted schools and held receptions for war brides, many of whom joined IODE.

In 1960, the Provincial Chapter opened IODE Clark House that provided a home for seniors in Fredericton for many years.  The Clark House Trust Fund still provides bursaries for students at New Brunswick community colleges.  In 2004, nine students each received $900.

The first New Brunswick High School Seminar on Safety was held in 1968; it continues annually, with IODE support.

In 1970, members welcomed new Canadians at citizenship courts.  Education efforts included adoption of over 200 schools in the province and two in Labrador.  The first Helen Toye Campbell Rose Bowl was presented for increased membership.

Kindergartens became a reality in the public school system as a result of the Provincial Chapter's brief submitted to the government.  The 75th anniversary project for children with learning disabilities resulted in another successful request to the government emphasizing the need for a provincial Learning Disabilities Diagnostic Clinic.  Following approval, chapters contributed $10,000 to establish the clinic.

In 1979, the provincial government presented the provincial chapter with a special International Year of the Child award.  The Citation read in part:  "Now in its 80th Year, IODE can reflect with pride on its contribution to New Brunswick's children.  Not only has the IODE provided instructional materials for pupils, but it has also promoted a heightened awareness of our country's heritage through support to the Canada Studies Program.  The IODE continues to recognize the educational system's needs through teacher training bursaries and with scholarships.  Special attention to children learning problems helped to launch the provincial program in Learning Disabilities."

Prior to the 1981 Provincial annual meeting, where the theme was “Proudly Canadian”, the Provincial Chapter sent large bilingual cards with the new words of the national anthem to every elementary classroom in the province.

New Brunswick members gave over $8,700 to the renowned Isaac Walton Killam Hospital for Children in Halifax to support kidney research.  Members continue their support through the annual Cent-A-Meal project.  Chapters in New Brunswick raised over $100,000 for the new Cardiac Care Unit in Saint John in 1990.  At the same time, New Brunswick launched the Born to Read program providing books to mothers of newborns.  This program continues and chapters in other provinces have adopted this worthwhile project.

A centennial campaign to raise $100,000 for the New Brunswick Child and Adolescent Psychiatry Unit is already funding education programs to benefit children and families.  Chapters have committed $10,000 for Roots of Empathy facilitator training.  This program aims to reduce bullying and aggression in children aged three to 14.  Chapters support Cassidy Lake Portage substance abuse facility that returns young people to society.  The most recent gift was a 32" flat screen TV and VCR/DVD player for teaching purposes.

New Brunswick has emphasized the importance of increasing membership in IODE with "The Shoes of IODE Membership Campaign" based on the premise that if the shoe fits, you can wear it in IODE.  Many ages, lifestyles and skills are represented;  the one common factor is members want to contribute to their community.

The work of IODE continues changing with the needs of the times, but it still maintains the original ideals conceived by Mrs. Murray and initiated by Mrs. Black.