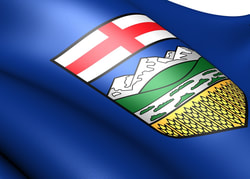 The Provincial Chapter of Alberta was incorporated in 1920.  Today there are 13 primary chapters, one municipal chapter and 232 members.  Each year, these dedicated women volunteer thousands of hours for IODE projects throughout the province to improve the quality of life for children, youth and those in need, through educational, community services and citizenship programs.

Since 1920 Alberta chapters initiated many diverse and exciting projects.  To commemorate the coronation of King George VI and Queen Elizabeth, the Coronation Bursaries were established. These two bursaries of $1,000 each are given annually.

Through the years IODE members have been mindful of the changing times and needs in their communities.  In 1966 The Municipal Chapter of Calgary pledged $17,000 for an occupational therapy centre when Camp Horizon opened.  Camp Horizon is a camp for handicapped children and adults at Bragg Creek, AB.

To celebrate the centennial of Canada, money was raised by the chapters to finance a focal point at Confederation Park in Calgary.  A map of Canada laid out on semicircular stone walls, each province defined with rock from that province and surrounded by provincial flags, the Canadian flag and the Centennial flag creates the focal point.

Alberta was first to initiate breakfast programs in schools.  The milk fund was established at that time and a primary chapter continues to fund the cost of the milk for a local Women’s Shelter.

The Provincial Chapter was a founding patron of Janus Academy in Calgary, a school for autistic children. This was the second of its kind in North America.

To facilitate the transportation needs of the physically disabled, five handi-buses have been purchased by the Municipal Chapter of Calgary over the years.

Through the Child Abuse Prevention Program, or CAPP as it is known to Alberta members, over $701,189 has been donated since 1986 to organizations and groups involved in programs to alleviate child abuse and neglect.  This is an outstanding contribution by the chapters of Alberta.  Money was raised by members through fundraising events, including casinos, raffles and donations.

Workshops were funded for childcare workers to upgrade their skills and to prepare them to identify and handle cases of child abuse.  Support of the Alberta Council of Women’s Shelters (ACWS) continues to this day.  Building on a long-standing partnership with ACWS to provide effective interventions for children who have lived with violence in their lives, The Healing Brain:  Supporting Resilience and Hope ACWS Children’s Curriculum, is grounded in the neuroscience of trauma, brain development, and the impact of toxic stress on children.  IODE Alberta funded the initial program more than forty years ago and this year (2020) will raise $100,000 to implement the changes to the program and continue to fund education programs for staff, volunteers and professionals who serve shelters as well as associated child and family serving agencies.  The funds will also facilitate formalized on-line courses.

A founding patron of Kids Kottage in Edmonton, the Provincial Chapter pledged $10,000 per year for a total of three years to assist with training courses for childcare workers.

In 1992, the Child Witness Preparation Program instruction package was sent to Police Officers to prepare children who are to witness in court.  This program, called “You Are Not Alone” was jointly funded by Alberta Justice and the Provincial Chapter of Alberta.  The program has expanded and is now known as the Canadian Child Abuse Association and now offers Court Accompaniment for Child Witnesses.

In 2000, the Municipal chapter of Edmonton raised funds for the flower garden at the entrance of Fort Edmonton Park in Celebration of the 100th Anniversary of IODE Canada. ​

Over the past 30 years, Alberta chapters have raised and funded well over $450,000 for education, citizenship and services projects.  The members are proud of the contributions made and the impact their work has had on the community and helping those in need.