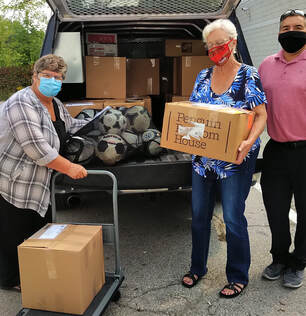 ​In 2019, a house fire in Big Trout Lake, northern Ontario, took the lives of a mother and three children. Firefighters felt that, if a smoke detector had been present, the loss of life might have been prevented.

IODE Ontario decided to spearhead a pilot project to provide smoke detectors for the community. Fire service professionals were engaged to determine the appropriate model for the conditions. IODE Canada was approached for financial assistance from the  Canadian Disaster Fund to purchase the detectors.  IODE Ontario service officers researched retailers to obtain the best price. We were able to purchase 102 smoke detectors at a cost of $2,200. They were delivered to this northern fly-in community by IODE Ontario’s partners on the OPP Indigenous Policing Bureau Team free of charge. Once in Big Trout Lake, an experienced tradesperson in the community undertook the task of installing the units.

This project was a successful collaboration of IODE Ontario, IODE Canada, Fire Services, the OPP and the community of Big Trout Lake.

Big Trout Lake  has  approximately 300 homes. In the winter of 2019-2020 there were two more house fires but fortunately no loss of life. The smoke detector that was recommended contains a battery which will last the life of the detector (approximately 10 years) which means basically that no maintenance will be needed.
IODE Alberta members were quick to support the relief efforts in many ways. Evacuated Fort McMurray residents were re-located across the province.  IODE Dardanelles, Carstairs, AB, provided clothing and household items to a displaced family who was staying at the local campground.  They also provided similar items and a gift certificate for the Carstairs Co-op in support of another evacuated person.  Two thousand dollars in bedding, clothing and gift certificates were sent to Fort McMurray relief centres.  Many other Alberta chapters donated clothing, furniture, bedding and financial support for those impacted by the fire.  Students re-located to schools around the province were assisted by IODE members who provided school supplies, backpacks and funding for breakfast and lunch programs.
​
​Twenty-four hundred homes and buildings were destroyed and the fire forced the largest wildfire evacuation in Alberta history at roughly 90,000 people.  The fire consumed approximately 590,000 hectares of land and was finally brought under control on 05 July.  Suspected to be caused by humans in a remote area, fueled by winds and tinder dry conditions, it continued to smoulder until late spring 2017.  Thankfully, no one died.
​
​Ontario Tornado
In August, a devastating tornado destroyed a large portion of the town of Goderich, ON. Many community members were left homeless. $2,000 was donated to assist IODE Maple Leaf Chapter with the building of a playground at a 12-unit housing complex being refurbished at the time of the tornado. The finished  playground was necessary before residents could move in.

Manitoba: Floods  In the spring, massive floods in Manitoba destroyed some communities.  One community of 600, Ojibwa First Nations of Lake St. Martin, was moved to Winnipeg. Their school, temporarily meeting in the Salvation Army Community Centre, was in need of school supplies for these students. IODE purchased approximately $3,000 worth of school supplies for these  students.
​
​Haiti: Earthquake  To alleviate suffering following the devastating earthquake in Haiti, IODE Canada supported a Canadian agency, Team Canada Healing Hand, with a donation of $3,000. The agency provided volunteers who travelled to Haiti to educate health and community workers in rehabilitation skills.  Medical equipment was purchased and the cost of volunteers’ travel was covered.

Sri  Lanka: Tsunami  At the 105th National Annual Meeting in Edmonton, Alberta, members voted to forward funds donated to the IODE Canadian Disaster Fund  designated Tsunami Relief to the Paynter Home Orphanage, Nuivari Eliya, Sri Lanka, to improve the quality of life for children in their care affected by the 2004 Tsunami. Thanks to the efforts of members, a total of $6,000 was sent to the Paynter Home Orphanage.​
2003
Nova Scotia: Hurricane  Following Hurricane Juan in 2003, IODE Canada allocated to IODE Nova Scotia $2,500 to assist fisherman with the purchase of lobster traps.​
2001
USA: 9-11  The National Chapter of Canada IODE contributed $2,000 to the Canadian Red Cross – USA Appeal for victims of the events on September 11, 2001.​
1997
Manitoba: Flood  During the floods in Manitoba our members raised over $14,000 to assist victims of the Manitoba Flood.