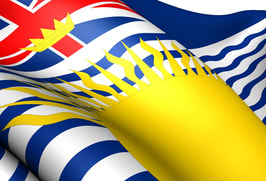 For 85 years IODE members in British Columbia have enthusiastically worked to improve life for those in their province and beyond.  The Provincial Chapter of British Columbia IODE is composed of 26 primary chapters with over 500 members.  In the 21st century the main thrust of IODE is the protection of Canada's citizens of tomorrow - our children and youth.

To commemorate the 100th anniversary of IODE, members in British Columbia promoted "Spinoza Bear", the bear who speaks from the heart.  Working through family services, abuse prevention facilities and the RCMP, members are helping to find recipients for Spinoza, a talking bear equipped with a tape recorder that plays nine different tapes, all stories that build self-esteem in children suffering trauma such as cancer, abuse, neglect or terminal illness.  Spinoza tells the children they are special, unique and original, like the colours of the rainbow; each may be different but he or she is beautiful in his or her own way.  Family service facilities that use Spinoza in their treatment of abused and neglected children, tell us children who are going through trauma often do not trust adults but will listen or talk to Spinoza.  This allows the children to work through their difficulties in a non-threatening way and gives therapists greater insights into each child's problems. The results have been amazing.

While children have a special place in the hearts of IODE members, the hearts of IODE members, the needs of others are not neglected.  The Provincial has several trust funds devoted to medical facilities, one of which is the IODE Glaucoma Centre, part of the Vancouver General Hospital Eye Centre.  With interest derived from its Charitable Trust Fund, the Provincial Chapter has over the years spent $575,000 on the building, equipment, research and fellowships.

In 1939 the Jessie R. Burke Memorial Cancer Fund was started.  The interest from donations to this fund has been put to good use at the British Columbia Cancer Institute in Vancouver, the Cancer Centre in Victoria and the Cancer Centre in Kelowna.  A total of $250,000 has been spent from The Mary Emerson Trust Fund, established in 1979 to benefit seniors throughout British Columbia.

Primary chapters are also involved in projects to benefit their own communities.  The chapter in Nanaimo donated backstroke flags for the city's Special Needs Swim Club and for the Special Olympics Swim Program.  Counting can be a difficult task for athletes who are mentally challenged;  flags along the lane assist them to overcome this problem by enabling them to anticipate how many strokes remain to the end of the lane without turning around or slowing down.  Once a swimmer has mastered counting the flags in his lane (four counts for a competitive turn, six counts before touching the wall) both the athlete and the coaches feel richly rewarded.  Furthermore, the flags help keep the pace for an aerobic workout.  Backstroke flags are also an important safety feature for both clubs and general public swims.  The backstroke flags were received by Nanaimo in 2002 in time for the British Columbia Summer Games and the Vancouver Island Zone High School meet so all groups and the general public could benefit from them.

Education also receives considerable attention at both the local and provincial levels.  Many chapters present "Born to Read" bags to parents of newborns and toddlers to encourage parents to read to their children. They also present books and subscriptions to libraries and schools.  Several chapters have adopted schools or classes in their local area while others have done so for isolated schools throughout British Columbia and Yukon.