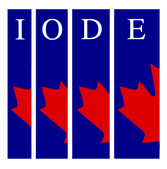 IODE was founded in 1900 by Margaret Polson Murray of Montreal who recognized a need for loyal support for Canadians departing to fight with the Empire forces in South Africa.

She encouraged the formation of a federation of women to promote patriotism, loyalty and service to others by sending telegrams to the mayors of Canada’s major cities urging them to call together the prominent women of their communities. The first chapter was formed in Fredericton, New Brunswick on January 15, 1900. The next month in Montreal, a draft constitution and the aims and objectives of a national organization were reviewed. Chosen were a name, Federation of the Daughters of the Empire, a motto, “For Queen and Country”, followed by a prayer and badge. Primary chapters were formed in quick succession across Canada, as were children’s (later called junior) chapters.

In 1901, the head office moved to Toronto, the federation was incorporated as Imperial Order Daughters of the Empire and Children of the Empire Junior Branch, and Edith Boulton Nordheimer was elected the first National President.

The name IODE was officially adopted in the ‘70’s. We are a federally chartered not-for-profit charitable organization with many levels within the association. Structured to report under the jurisdiction of The National Chapter of Canada IODE are Provincial, Municipal and Primary Chapters across Canada.

IODE is proud of its heritage and traditions. The following brief history is a picture of great achievements by many loyal and dedicated women.
1900
The Founder of Empire Day, 1897, Mrs. Clementina Fessenden, worked closely with IODE in its infancy and the first Empire Day Programme was arranged by IODE in Fredericton, New Brunswick on May 23rd.

1900 – 1902
IODE members raised funds to honour the 90 Canadian soldiers who gave their lives in South Africa. A monument was unveiled in Bloemfontein, South Africa, by the Earl of Athlone (later Governor General of Canada), and IODE funds have helped to maintain the graves in intervening years.

1901
The National Chapter Head Office was established in Toronto and the first executive meeting held. Mrs. Edith Boulton Nordheimer is elected as the first National President.

1901
The National Chapter erected the Alexandra Gates, an iron grilled gateway to Queen’s Park, Toronto, to commemorate the visit to Canada of the Duke and Duchess of York – later King George V and Queen Mary.

1902
A four-page pamphlet was created as a channel of communication to chapters across Canada. Today, Echoes magazine is mailed to members three times a year.

An Education programme, Commonwealth Relations, is formed and IODE built and furnished a room in a domestic science school in Bombay, India. Annual Commonwealth Scholarships are available.

1904
Hamilton Municipal Chapter is the first IODE chapter to provide beds in existing sanitoria in a campaign waged against tuberculosis.

1910
National Chapters were formed in the Bahamas, Bermuda and Newfoundland (which later disbanded).

1912
The IODE Preventorium in Toronto was the first institution of its kind in North America, established for the treatment of those children who had been exposed to, but not yet contracted tuberculosis.

1915
The first Tag Day in Canada was IODE “Rose Day” for a child welfare project.

1917
An Act of Parliament incorporated IODE.

1917 – 1918
The “Home for Mentally-Deficient Children” is established in Halifax following the disastrous explosion in 1917 and was the first institution of its kind in Canada.

1919 and 1946
To honour Canadians who gave their lives or suffered disabilities in the two World Wars, two War Memorial Funds were established for children of those killed or permanently disabled veterans and to establish a permanent memorial of postgraduate scholarships. Chapters have subscribed over $1,000,000 to these bursaries. Following the Second World War, terms were broadened and as of 1995, 3.7 million dollars have been awarded from the War Memorial Funds.

World War I and II
$12,000,000 was raised by IODE members to purchase hospitals, hospital ships, ambulances, bomber and fighter aircraft and field comforts for Canadian service personnel. Relief to prisoners of war and refugee camps, libraries and canteens for servicemen and thousands of volunteer hours were among the many contributions in both wars.

1921
The National Society of the Daughters of the British Empire in the USA was granted affiliation with IODE in Canada.

1925
The first IODE calendar is sold with its proceeds used by the National Education department to finance special awards to students at Canada's National Ballet School and the National Theatre School of Canada and to purchase musical scores of the National Youth Orchestra of Canada.

1931
The National Chapter Endowment Fund was inaugurated with an objective of $200,000, the principal to be held in trust and the income to be used to further the work of the Order.

The Vancouver Preventorium, a joint IODE-Rotary Club project, is opened.

1932
The International Peace Garden located on the border of Manitoba and North Dakota is dedicated to peace and friendship between Canada and the United States of America, and is continuously supported by IODE.

1938
The Wilhelmina Gordon Foundation Fund is established for postgraduate study in English at Queen’s University. Originally the prize was $25 and now $800 is distributed annually.

1939
IODE was the first Canadian organization to send civilian relief to Britain and continued with the adoption of two children’s hospitals there.

1940
$100,000, raised in one month to purchase a Bolingbroke Bomber, is presented to the Government of Canada.

1941
The Lucy Morrison Memorial Fund for Education is established in Ontario with over $500,000 donated. The Fund grants bursaries, fellowships and special awards.

1944
A unique wartime gift was the shipment of 87 wedding outfits to Women’s Service Headquarters to be distributed on loan to British service women.

1945
Saskatchewan IODE created The Avenue of Trees, each tree bearing a plaque in memory of Saskatchewan men who lost their lives during the war.

Over $1,000,000 was raised during the period of 1946 to 1950. Massive quantities of clothes, medical supplies and food were sent for relief of displaced persons. $100,000 was raised across Canada by exhibiting a needlepoint carpet made by Queen Mary and was used to provide much needed dollars for Britain following the Second World War. The carpet was presented to the people of Canada in 1951 by Princess Elizabeth and is housed in the National Gallery of Canada.

1947
An ermine cloak was the gift of members throughout Canada to Princess Elizabeth on the occasion of her marriage, November 20th.

1949
The jeweled badge, given to Mrs. Clark Murray by the Primary Chapters in the Province of Quebec, was presented by Mrs. Murray’s two daughters, and since then, has been worn by each National President during her term of office.

1950
$500,000 is raised to assist victims of the Manitoba flood with food, bedding and home furnishings.

1954
1000 members who trained in civil defence brought immediate aid to victims of Hurricane Hazel in Ontario.

1962
To celebrate Canada’s Centennial Year, the IODE Centenary Fund was established and $52,333 was raised by 1967. $1000 was given to the three chapters in the Yukon and the reminder divided equally among the ten provinces to be used for special Education projects.

1965
Nova Scotia members prepared hot meals and served thousands of rescue workers at the Springhill Minehead for 24-hour periods during the two-week emergency.

Toronto Municipal Chapter used funds from the sale of the Children’s Convalescent Hospital (formerly the Preventorium) and raised $500,000 to build The IODE Children’s Centre at the new North York General Hospital.

1973
By this time, all the separate service funds to which chapters have contributed are amalgamated as The National Services Fund (Child and Family Welfare, Ex-service Personnel, Post War Services, Overseas Relief, Shipping and Korean projects).

1975
The 75th Anniversary Project “Concern for Children” raised $125,208 from the sale of red floribunda roses, named “IODE Rose” to mark this event.

1977
The National Chapter purchased 38 watercolours by Winifred Petchey Marsh to celebrate the 25th anniversary of the accession to the Throne of Queen Elizabeth II for presentation to the Prince of Wales Northern Heritage Centre in Yellowknife, NWT.

1977
Police Community Relations Awards were created to honour an individual or unit making a significant contribution in their community.

1978
Adopt-A-Class project in Labrador is formed.

The Ursula E. Bangs Scholarship for study in cardiovascular disease is offered annually to a graduate doctor at the University of Toronto.

1981
A Marsh painting is presented to the Prince and Princess of Wales as a wedding gift for their own personal collection by IODE. The Prince of Wales had expressed great interest in the Marsh painting at the opening of the Heritage Centre in 1977.

The Provincial Chapter of Newfoundland is formed.

1985
To recognize the best in Canadian’s children’s literature, The National Chapter of Canada  IODE Violet Downey Book Award was introduced.

1990
The 90th Anniversary project was created to build the IODE Percussive Arts Centre for the Music Camp at the International Peace Garden.
Looking ahead to the 100th Anniversary in the year 2000, a fund was established with a goal of $100,000 to provide a gift for Canada.

Born to Read, a program of providing books to mothers of newborns, was undertaken as an IODE project in New Brunswick, and has become a National Chapter Education project.